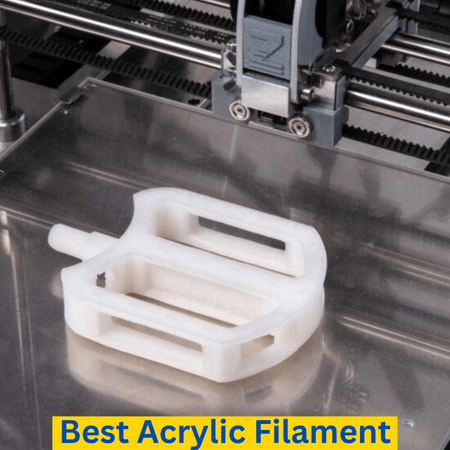 You’ve probably heard of acrylic. That clear plastic that’s typically sold in sheets at your local hardware store and used in everything from medical devices to automobiles.

Well, did you know you can actually 3D print it?

Want to hear about more of the best acrylic filaments? Just keep reading! 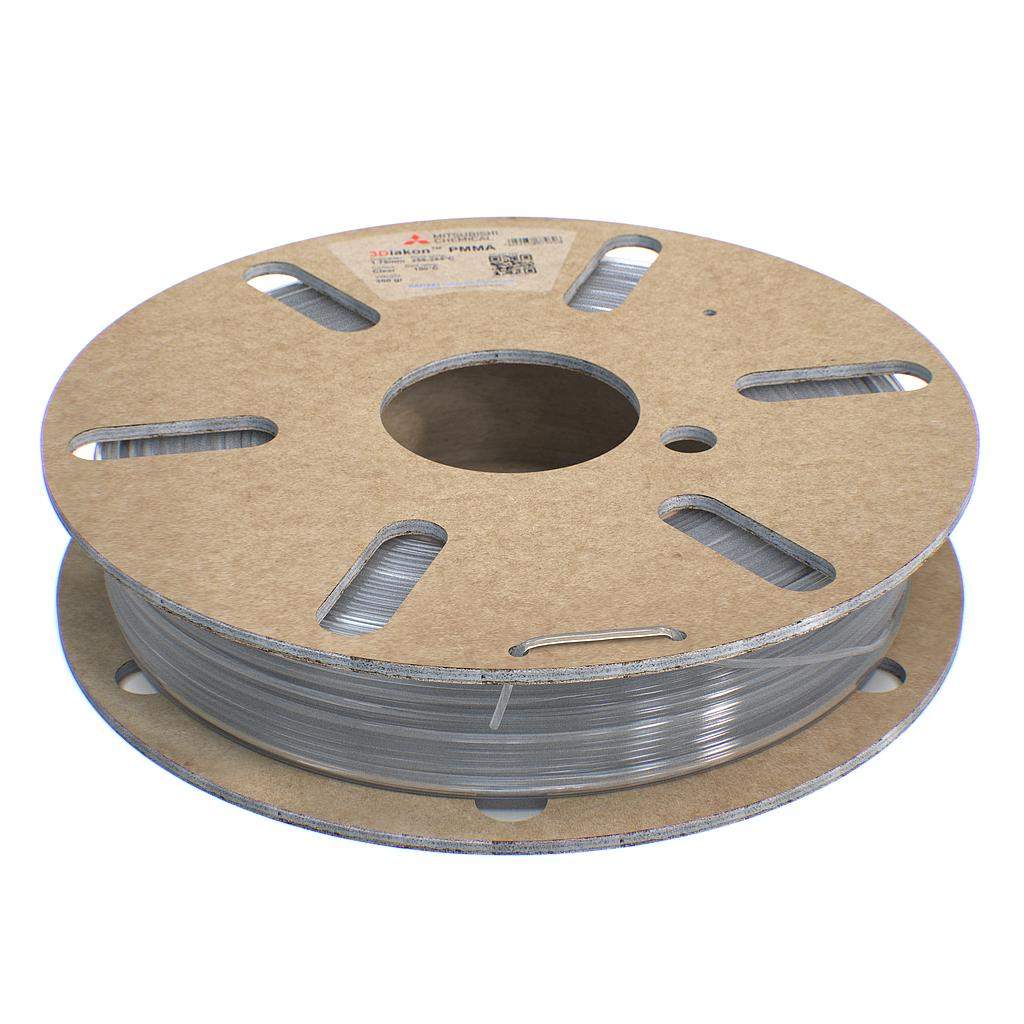 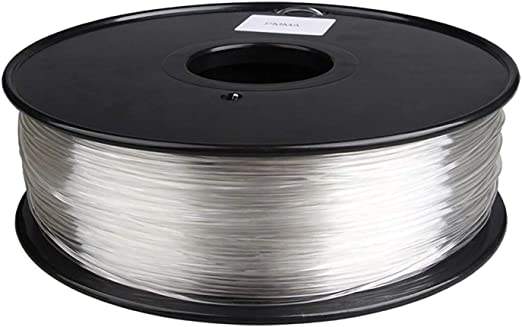 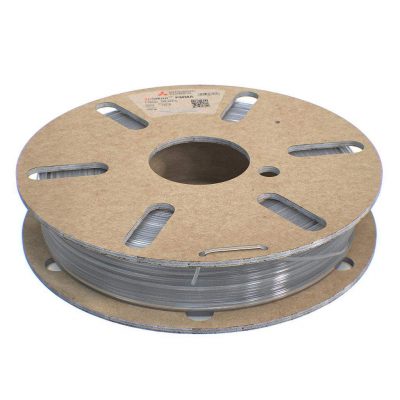 First up we have FormFutura 3Diakon. FormFutura makes a lot of different 3D printing filaments, and 3Diakon is their line of acrylic material. It’s known for being very high-quality while not costing too much.

Sadly, 3Diakon is only available in one color: clear. But it’s worth noting that the filament is actually extremely clear, making it a great option for 3D printing parts that you want the light to pass through, such as a lamp shade or window panel.

Additionally, the filament has been tested to have very good durability properties. According to FormFutura, the filament is very UV-resistant, weathering-resistant, impact-resistant, and a whole lot more of other “resistants”.

It’s also not too difficult to print. Of course, as a PMMA filament, an enclosure is suggested. But the hot end and bed temperature recommendations are pretty low, at 245 °C and 100 °C, respectively. This means you can print it on budget 3D printers, like the Creality Ender 3, as long as they have an enclosure.

So, if you want to try out PMMA filament and are looking for a filament that’s a good overall pick, FormFutura 3Diakon is for you!

Second, QDTD isn’t a very popular filament manufacturer, but their PMMA filament is one to be rivaled. The filament is extremely clear, making it a popular option for those looking to print items like lampshades, vases, and LCD covers.

Sadly, there isn’t much information about this filament, such as official strength measurements.

However, the manufacturer recommends using a hot end temperature between 200 °C and 240 °C, which is very low for PMMA filament. While this might make 3D printing this filament a bit easier, a lower nozzle temp also means weaker layer-to-layer adhesion, so expect parts to be a bit weaker than other PMMA filaments.

Nonetheless, QDTD is still a terrific option for PMMA due to its ease of printing and transparency. As an added bonus, this filament is available in a full, 1-kg spool, which most PMMA filaments don’t come in. PMMA filament can get rather pricey, so finding value in these filaments is important. Push Plastic PMMA filament offers perhaps the best bang for your buck out of any PMMA filament I’ve ever seen or used.

The filament comes in either 1-kg or 3-kg spool, which is epic because most acrylic filaments come in sub-1-kg spools for cost reasons. And, on this note, Push Plastic’s PMMA filament is very reasonably priced, with a 1-kg spool costing under $50.

Additionally, printing shouldn’t be too hard, given that the recommended nozzle temperature for this filament is only 230-250 °C. This is low enough to make the 3D printing process a bit easier without significantly lowering the layer-to-layer adhesion of parts. As such, this filament should be easier to use than other PMMA filament options while not being noticeably weaker.

Similar to other acrylic filaments, Push Plastic PMMA only comes in clear color. But this clear is very, very clear, making it great for 3D printing parts that need to allow light to pass through them.

I strongly suggest Push Plastic PMMA filament if you want to print acrylic and are on a budget or you don’t want to overpay for this type of filament! 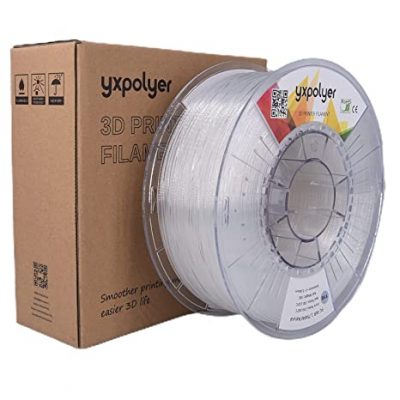 YXPolyer PMMA isn’t your typical PMMA filament. It’s actually an alloy plastic composed of PMMA and polycarbonate material with some other additives mixed in to provide maximum strength and exceptional print quality.

With a tensile strength of 58 MPa, the YXPolyer PMMA alloy filament is perfect for printing strong models, like a phone cases, electronics boxes, or drone parts.

But what I love most about this filament is how well it prints. Moreover, YXPolyer PMMA alloy isn’t as sensitive to the slicer settings as other PMMA filaments, making it much easier to achieve high-quality prints with a lot of detail.

So, if you want to print PMMA filament with a high level of print quality, look no further than XYPolyer PMMA + PC alloy filament! 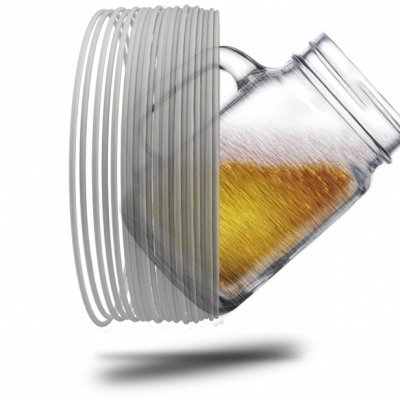 You’ve almost certainly never heard of Treed Filaments, a small manufacturer of 3D printing materials based in Italy. But their acrylic filament, known as HIRMA PMMA, should definitely be on your watchlist.

HIRMA PMMA might have too many capital letters to be taken seriously (just kidding), but it’s a modified version of regular PMMA filament meant to provide enhanced properties while still being easy to print.

Make sure to check out our article on the strongest filament you can buy if strength is of highest concern.

Additionally, while PMMA is normally a very hygroscopic material, meaning it can be ruined by water easily, HIRMA filament has a very low moisture absorption rate. As such, you won’t have to be as careful when it comes to handling and storing the filament.

There are also a lot of suggestions for the print setting (e.g. print speed) provided by Treed Filaments to further make the printing experience easier.

So, if you need a PMMA filament that has Superman-like strength and easy printing properties, I urge you to get some Treed HIRMA PMMA filament! 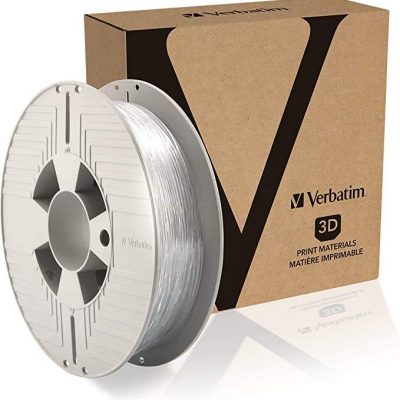 Lastly, Durabio is a filament developed by Mitsubishi Chemical, which is, you guessed it, a subsidiary of the popular Japanese car company.

Durabio, just like Treed HIRMA filament, is a derivative of PMMA filament. As such, it’s based on PMMA filament but with some special modifications to improve its performance.

Specifically, Durabio was made to improve the impact resistance of normal PMMA plastic. As such, this filament is insanely durable and very resistant to sunlight, wear, scratching, heat, and different chemicals.

Despite the modifications, Durabio is still very transparent too!

Additionally, Mitsubishi Chemical points out that Durabio filament is also BPA-free, which means it’s more health-friendly. Note that this does not mean that Durabio is food-safe or FDA-approved; it just means that it doesn’t contain a certain polymer known to be harmful to humans.

Sadly, it’s difficult to get your hands on a spool of Durabio filament as it’s very catered towards professionals and businesses. But, if you find the right manufacturer, it can be done. And I suggest trying it out as it’s an overall great pick, especially for strength!

What Is PMMA Filament?

Polymethylmethacrylate, abbreviated as PMMA, is a strong thermoplastic material that you probably better know by the less-nerdy name acrylic. Acrylic is super strong, impact-resistant, UV-resistant, and naturally transparent.

Because of these properties, PMMA is commonly used for glasses lenses, LCD covers, transparent sheets (e.g. for 3D printer enclosures), and more!

While 3D printed acrylic parts won’t be as strong or as transparent compared to traditional manufacturing methods, they’re still super useful. For example, you can use 3D printed PMMA parts for lamp covers as they’ll be semi-transparent, letting some light pass, and they’ll also be super strong.

But PMMA isn’t all good. Moreover, it’s not a food-safe material, and it’s also relatively difficult to print, with high hardware requirements.

But if you’re okay with its flaws, PMMA is a terrific filament material that’s perfect for making strong and transparent models.

PMMA and PLA, the most popular filament material for FDM 3D printing, have a lot of differences.

First off, PLA is much easier to print. On top of lower hardware requirements (no enclosure, lower temps) compared to PMMA, it’s also much easier to achieve high-quality prints because this material isn’t as sensitive to the slicer settings.

But, when it comes to part strength, durability, and overall resistance to the elements, PMMA takes the cake, no question. The tensile strength of PMMA is much higher than that of PLA, and parts printed in PMMA are also a lot less brittle.

Additionally, PMMA is very resistant to UV rays. While a PLA part would deform under the sun in just a few hours, a PMMA print wouldn’t be affected at all!

It’s also worth noting that PLA is food-safe (generally), while PMMA is not. This might matter to you if you plan on 3D printing food-contact parts.

At the end of the day, PLA and PMMA are both great filament materials, but they definitely have their respective audiences. PLA is better for those new to 3D printing who want to print models but don’t mind if they’re not very durable or strong. PMMA, on the other hand, is for users who have higher-end hardware (e.g. an enclosure) and need their prints to be much stronger (or transparent).

As I mentioned, PMMA is not considered a food-safe material in general. And there are no FDA-approved PMMA filaments. As such, I don’t recommend printing any parts that will touch food, water, or other edible/drinkable substances.

How to Print Acrylic Filament?

As I mentioned, 3D printing acrylic can get pretty difficult.

There are relatively intensive hardware requirements for printing this material. Most PMMA filaments require similar high temperatures as ABS, with a suggested nozzle temp around 240 °C and a bed temperature of about 110 °C.

Additionally, it’s recommended to have an enclosure for your printer when printing this plastic material. That’s because PMMA is sensitive to changes in temperature, and an enclosure helps trap heat around your printer while also keeping out air drafts

It’s also suggested to use an adhesive for the bed, like glue, ABS juice, or special products like Magigoo. These help ensure good first-layer bed adhesion.

But even after you get all the right hardware for acrylic 3D printing, it will be difficult to achieve high-quality prints. That’s because PMMA is relatively sensitive to slicer settings, so any issues with the temperature, retraction, print speed, and other settings might cause big issues with printing.

But once you get the hang of it, printing PMMA isn’t all that bad. It just takes some experience and practice. Checking any suggested settings from the manufacturer or user reviews always helps!

How to Store PMMA Filament?

Another property of PMMA filament is that it’s hygroscopic. This means the plastic absorbs moisture from the air pretty fast. And, if moisture gets in the material, it will degrade the quality of the filament, leading to printing issues and brittle parts.

To combat the moisture absorption of PMMA filament, you should store your spools in a dry environment. I suggest using a filament dry box such as the Sunlu FilaDryer S2. You can check out other options in my article reviewing the best filament dryers and dry boxes.

Overall, acrylic, or PMMA, is an absolutely amazing filament material that offers a ton of strength as well as natural transparency. So, if you’re printing a drone part, vase, lampshade, or any other model that needs either strength or transparency, definitely consider using PMMA filament.

If you do want to get some PMMA filament, I strongly suggest going with FormFutura’s 3Diakon filament, as it’s super strong, decently affordable, and not too hard to print.

If you’re looking for the easiest printing experience, though, QDTD filament is probably the one for you.

And, if you’re shopping on a budget and want a 3D printer acrylic filament that brings you the most bang for your buck, take a look at Push Plastic’s PMMA filament. 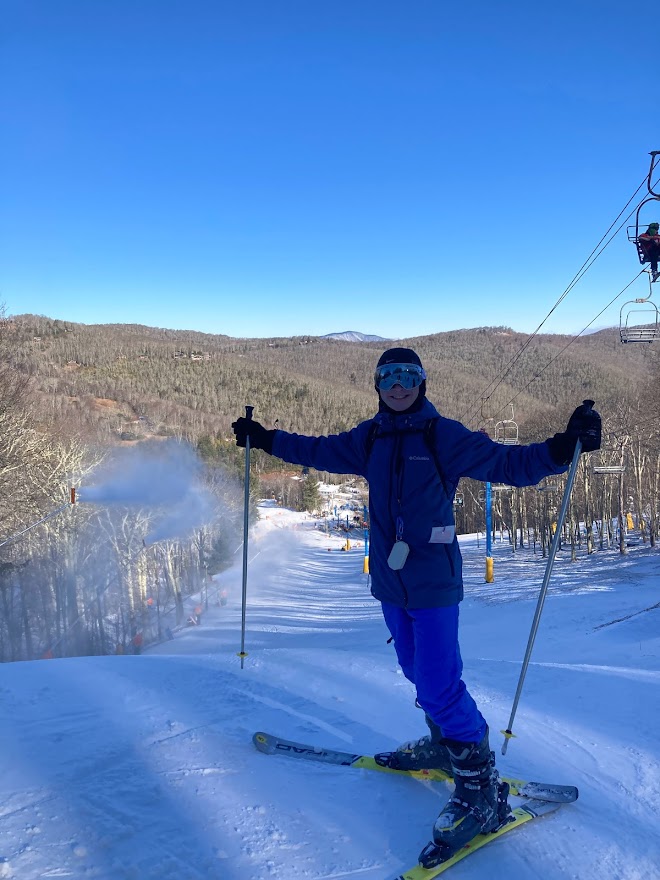 Jackson O'Connell
Jackson is from Roswell, Georgia. He's studying finance and computer science at the Georgia Institute of Technology and is deeply interested in 3D printing technology. Jackson has built a handful of 3D printers and loves spending time improving his machines and making new DIY projects. He especially enjoys researching and writing about 3D printing to help other users in the field.
Scroll to Top