Is your 3D printer shaking? It’s not a dance party! Tell it to stop!!!

A shaky 3D printer not only sounds very annoying, especially in your bedroom, but it also contributes to numerous print quality issues that make your prints a lot worse.

If your 3D printer isn’t stable, the first thing you should do is lower the printing speed and tighten the belts. If that doesn’t work, try tightening the screws around the hot end and bed, and place your 3D printer on a less wobbly surface. Maybe even add some rubber feet under the printer!

To learn more about 3D printer shaking and how you can solve it, keep reading!

Why Does a 3D Printer Shake?

A 3D printer can shake for many different reasons. It might be a loose part on the printer, or it could be a lack of lubricant on a moving component. It might even be the surface your printer is placed on!

In the sections below, we’ve gone over the most popular causes of 3D printer shaking!

The most popular cause for a 3D printer shaking is a high print speed. The faster anything moves, usually, the louder it is. Just like a race car!

But unlike a race car, the speed on your 3D printer is controlled digitally and is a setting in your 3D slicer program. 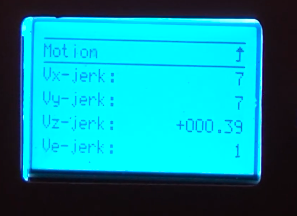 Jerk is the derivative of acceleration, or how fast your 3D printer’s moving components accelerate. The higher this setting, the louder your printer will be. Similar to printing speed, the jerk settings are controlled in the 3D slicer.

Our biggest set of potential causes for a shaky 3D printer lies in the mechanical aspect of your printer. There are a handful of mechanical issues, from loose belts to damaged bearing wheels, that might be contributing to the instability of your printer. Read the sections below for some more detail.

Just like with pants, if your belt is loose, your 3D printer will shake. That’s because belts control the movement of the print head and print bed on your printer, and if there’s too much slack in the belt, the moving part will likely rattle and shake your printer.

Similarly, loose bolts/screws can also cause your printer to shake because printer vibrations caused by moving parts won’t be absorbed properly. For example, if some of the bolts that hold the aluminum extrusions on your printer are loose, the whole printer will wobble and shake every time the print bed or printhead moves.

Most 3D printers use bearing wheels to assist the motion of the different moving components (e.g. print bed). This movement system is relatively inexpensive for manufacturers and works fine, but if the wheels are loose, dirty, or damaged, the rest of your printer might shake. That’s because the printer vibrations caused by the moving parts won’t be properly absorbed by the bearing wheels if they are dirty, loose, or damaged.

Our last mechanical cause of 3D printer shaking is a broken motor bracket. The stepper motors on a 3D printer are the main source of motion for the machine. And, if they’re not properly secured to the frame, they will rattle like crazy and shake the rest of the printer in the process.

When your 3D printer is actually printing, it’s constantly sending out excessive vibrations, which make it shake. These printer vibrations are unavoidable, but how far they spread is. If the table or surface that your 3D printer is placed on is wobbly, each vibration will rattle the entire structure, not only making your printer unstable but also making it louder.

Check out our reviews of the best and most stable 3D printer tables here.

Now that you know what causes a 3D printer to shake, it’s time to get into the solutions. In the sections below, we’ve gone over the most effective and easiest methods to stop your 3D printer from shaking.

Our first method and most common solution is to lower the print speed, which can be done in your 3D slicer.

While printing fast is nice, it shakes the printer due to excessive vibrations. And, I don’t know about you, but I’d rather have a stable printer than a fast one because it will put out higher-quality prints.

As for how much to lower the printing speed, it varies by situation, but I suggest a decrease of around 20 or 25%. So, if you’re using a speed of 60 mm/s for PLA, try dropping it down to 45. You can always increase it later if you want more speed, or you could try other solutions.

As we mentioned, an improper jerk setting can cause a shaky 3D printer. To solve that, rather than adjust the specific jerk values on your printer’s LCD, you can enable “Jerk Control” in Cura, a popular 3D slicer program, to control these values.

Once enabled, the Jerk Control feature will load a series of other jerk settings, such as Infill Jerk and Wall Jerk, all controlling the jerk values of their respective functions. With this adjustability enabled, you can lower some of the jerk values to achieve a less shaky print.

The default jerk values for these settings are 8 mm/s, but I suggest going down to 6 mm/s as this usually does the trick.

Easily the most effective mechanical solution to a shaky 3D printer is tightening the belts. Tightening the belts removes slack from the belt line, giving your 3D printer’s moving components, like the hot end, a lot less space to wiggle, thus reducing the vibrations.

You can usually tighten your printer’s belts by loosening the belt pulley at the end of one axis of your 3D printer, pulling it tauter, and then retightening it. Some printers, like the Ender 3 V2 and Ender 3 S1, also have integrated belt tensioners that have thumbscrews that you can use to tighten the belt.

You can also tighten any loose bolts or screws on your printer that might be letting vibrations shake your printer. The first screws I’d look at to tighten are any of the moving components of your machine, such as the screws that hold on the fan shroud. Also, make sure to tighten any screws for fans!

But how do you apply the lubricant? Well, some ol’ WD-40 usually does the trick, but you can use really any liquid lubricant. Just apply a drop or two of it close to the inside of each bearing wheel, and you should be set.

The tracks on your 3D printer refer to any axis forum that the moving components on your printer, like the print bed and printhead, move across. For example, the Ender 3’s tracks are those aluminum extrusions.

I suggest printing (or purchasing) a filament spool holder that rotates and keeping it close by your machine. That way, it doesn’t interfere with the extrusion of your printer but also doesn’t cause shaking.

5. Put the Printer on Foam Pad

Another solution for your 3D printer shaking is to place your printer on a foam pad. Foam is an excellent material for absorbing vibrations, and this will keep the shaking to a minimum. You can usually buy some foam from your local hardware store, but an alternative solution is to replace the rubber pads on the bottom of your printer.

Our last solution is to level the table that your 3D printer is placed on. That’s because an unlevel table will wobble, and this will 1000% make your printer shake, as well as make it much louder. For wobbly tables, I like to just put a handful of napkins under the wobbly leg of the table.

A 3D printer shaking may seem like merely a visual issue, but it’s so much more, leading to lower-quality prints, a louder printing process, and other problems.

If you want to stop your printer from shaking, my first suggestion is to lower your printing speed and tighten the belts on your 3D printer. But, if that doesn’t work, try tightening any loose bolts, especially around moving parts and fans, lubricating the wheels, and leveling the table that your printer is on.

Jackson is from Roswell, Georgia. He's studying finance and computer science at the Georgia Institute of Technology and is deeply interested in 3D printing technology. Jackson has built a handful of 3D printers and loves spending time improving his machines and making new DIY projects. He especially enjoys researching and writing about 3D printing to help other users in the field.
Scroll to Top