If you’re a 3D printer enthusiast, you know an open source printer is the way to go. It allows you to modify hardware and keeps you from being attached to a manufacturer’s whims. Plus, the open source philosophy is crucial for encouraging constant improvement.

The best open source 3D printer is easy to use, easy to modify, and will create high-quality prints.

We’re here to help you figure out which one that is. But before we dig into 3D printer specs, let’s define “open source” and remind you of its advantages.

What Is Open Source?

The term “open source” originally comes from software developers who traditionally made their source code freely available. With access to the source code, professionals, hobbyists, and everyone in between could edit and redistribute the software.

The open source philosophy carries over to the world of 3D printers, thanks in large part to the RepRap Project and community. The RepRap project created the first low-cost, self-replicating 3D printer with an open source design, meaning all of the project’s intellectual property is free to use and modify.

The open source idea is vital to 3D printers because collaboration allows for faster technological gains. Many 3D printers come as a DIY kit; users have to build the printer from scratch and often modify the design as they go. As hobbyists and professionals tinker with 3D printer hardware, they find new ways to improve the design.

For a consumer, open source technology means you’ll always have control. It doesn’t matter if the original manufacturer shuts their doors; your machine can keep on printing. You can replace any worn or broken parts using the original design because it’s open source.

With closed source hardware, modifying or copying parts of the machine will void any warranty, and you’ll be infringing on intellectual property, which is against the law. 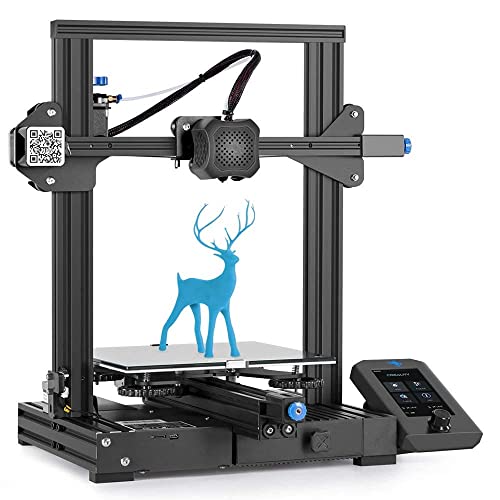 A genuinely open source 3D printer is something to appreciate. You can build it, tear it down, and change it to suit your needs, all without infringing on any intellectual property. That’s not to mention all the epic things you can print!

So, what are the best open source 3D printers?

We’re glad you asked. Below we review our six favorites in thorough and honest detail. We cover ease of use, quality of printing, and who each printer is best suited for. We’ll also discuss access to community support because rest assured each printer on this list is fully open source.

For an affordable, high-quality, beginner-friendly 3D printer, look no further than the Creality Ender 3 V2. The level of quality this machine prints at is comparable to much more expensive models, and it comes mostly pre-assembled, though there are some technical steps you’ll need to take to make it run.

Unlike its predecessor, the Ender 3 Pro, the Ender 3 V2 has built-in screw-driven belt tensioners, which allow for easy and exact adjustments. It also has a much better screen interface than the Ender 3 pro had. The console provides a seamless user experience, making the V2 better for beginners.

The Ender 3 V2 features a self-developed silent motherboard as well. That means it’s quiet while it prints, which may be ideal if you’re trying to focus on other projects. And it has a glass bed which makes for smooth, shiny prints. Of course, glass beds are heavier, which may lead to print ringing (the wavy pattern that can appear when a printer bed vibrates).

With its built-in tool drawer, you can easily store necessary tools like tweezers or an Allen wrench with your machine. If you’re new to 3D printing, you might not understand, but we promise, having a few tools close at hand can be a huge advantage!

Maybe the biggest plus to the Ender 3 V2 is the huge community that’s formed around Creality machines. They’re not always the easiest to put together if you’re not so mechanically inclined, but with such a vast support network, assembly advice isn’t hard to come by.

The Prusa i3 MK3S+ provides outstanding print quality without fuss and tinkering on the user’s part. Though it’s on the pricey side of things, this 3D printer is one of our favorites for beginners or those who don’t want to spend too much time modifying their machine. You can purchase it as a DIY kit or as a fully assembled product.

Whether you put it together yourself or buy it ready to go, you can rest assured that the Prusa i3 MK3S+ will create high-quality, error-free prints every time. Prusa designed the extruder on this model to sit closer to the x-axis, providing less resonance and higher quality prints, even when using flexible materials.

The open-frame design means you shouldn’t run this printer around kids or pets, at least not unsupervised. You also need to keep materials that could ignite or melt away from the machine. That’s because there’s no covering for the extruder, which will reach high temperatures during use.

Fortunately, Prusa designed this printer to cool down automatically when it’s finished. That’s not a feature you see in every 3D printer!

Also somewhat unique to Prusa is the community behind them. Not only is the software for this printer straightforward to use, but it’s also backed by 24/7 customer support via Prusa’s professional team. If the professionals don’t have an answer, there are plenty of unofficial support groups on Facebook and other social media hubs.

The printers we’ve discussed so far are cartesian style printers, meaning they run along the Cartesian plane, or X, Y, and Z axes. Delta-style 3D printers work differently. They support the extruder with three arms attached to three vertical posts that sit in a triangle. The arms can move vertically and allow the extruder to move in every direction while printing.

The Monoprice Mini Delta is an excellent delta-style machine that is reasonably priced. It’s great for those who have some technical background but are just getting into 3D printing. As an entry-level 3D printer, it’s both versatile and simple to use.

It’s speedy too. We tend to value delta-style printers because they’re far faster than their cartesian cousins, and this one’s no exception. Unfortunately, the unique design of a delta-style printer has a downside, one that’s magnified in the Monoprice Mini Delta– a tiny build area.

The build space on any delta-style printer is limited, but on the Monoprice Mini, that’s exceptionally true. It also has a thin build sheet surface that may stick to and then rip finished prints, though it’s nothing a little 3D printer tape can’t fix.

Assuming you’re not trying to maximize printing capacity, this is a great machine to enter the 3D printing world with. It works right out of the box and is small enough to take on the go! As long as there’s a power outlet, you can print anywhere you want.

If you enjoy building machines and want a speedy, efficient 3D printer, you should consider Voron. Voron makes three versions of their 3D printer design: version 0, version 1, and version 2. All of them use a CoreXY motion system which separates them from other cartesian-style 3D printers.

CoreXY motion systems have a few advantages. The belts move in different planes, reducing undesirable twisting, and it can hold the X and Y motors stationary, which reduces the weight of the machine’s moving parts.

These machines are small and fast without sacrificing quality. They have a higher build capacity relative to the machine’s size and move faster than other 3D printer designs. Voron also features a stationary print bed, so vibrations can’t ruin your print. And, they have HEPA filters built-in, which we love from a user-health standpoint.

However, Voron isn’t great for beginners (check our article here if you’re looking for a beginner 3D printer) or anyone who doesn’t want to tinker with their printer. You have to purchase whichever model you choose as a DIY kit, and printing additional parts can be expensive. Plus, if there are any inaccuracies in your printed pieces, it will affect the machine’s ability as a whole.

5. Anet A8 Plus (Best Value Alternative)

The Anet A8 Plus comes as a DIY kit or as a partially assembled machine. Though it doesn’t offer the best out-of-the-box experience, it is affordable and easy enough for someone with moderate skills to assemble, modify, and use.

It features an eye-pleasing minimalistic design and an admirably large build area. If you plan on printing at various sizes, the Anet A8 provides that flexibility. It’s also great at dimensional accuracy. However, it lacks the ability to print super sharp details.

The price point is exceptional, and there are lots of upgrades you can make on the Anet A8 to create more functionality. It may not produce the best of the best when it comes to quality prints, but it’s worthy of consideration.

The Prusa SL1 is an SLA (stereolithographic) printer, meaning it uses liquid resin rather than filament to produce 3D prints. There are pros and cons to this, but Prusa sticks to its overarching goal. They want to create affordable, easy-to-use 3D printers, and the Prusa SL1 is precisely that.

You can purchase the Prusa SL1 pre-assembled or as a DIY kit. The pre-assembled version is a cinch to use right out of the box, and if you opt for the DIY version, the instruction manual is top-notch. Novice users will have no problem setting up this machine.

This printer handles details without an issue and works well with 3rd party resins. Unfortunately, with resin printers, the first few layers are the most crucial. If they don’t set correctly, your entire print is a bust.

Some resin printers allow you to pause and raise the print bed to ensure the first few layers look right. With the SL1, you can pause things, but you can’t raise the bed to check.

Resin printers also are notorious for letting off noxious fumes. That’s unavoidable given the materials you’re working with, but the SL1 does, at least, have a carbon filter to help with bad smells.

If we had to choose one printer on this list, we’d go with the Ender 3 V2. It’s the best in terms of value and ease of use. Plus, it has vast community support.

The Prusa models are great as well, especially the SL1, if you’re looking to print with resin.

That said, the best open source 3D printer is the one you’ll use most readily. For some, that will be a machine that they can build from scratch and modify to their heart’s content, like the Voron models. For others, the best 3D printer is one that will work right out of the box.

Either way, you’ll benefit from open source technology. It makes modifying and updating your 3D printer an absolute breeze!