Easily one of the best parts about owning a Creality Ender 3 printer is the ability to upgrade it.

Because the machine is open-source and has a large community following, there are tons of available modifications and upgrades for the Ender 3 and its offspring, like the Ender 3 Pro and Ender 3 V2.

Perhaps the easiest way to upgrade the Ender 3 to a direct drive system is using a kit, such as the Micro Swiss Direct Drive Extruder kit. But you can also make this upgrade using a collection of self-sourced parts, including 3D printed brackets.

Want to learn more about the Ender 3 direct drive upgrade and how it can benefit you? Well, then, just keep reading!

What is Direct Drive?

The term “direct drive” means that a 3D printer’s extruder is placed directly above the hot end assembly (where the nozzle is).

Why Upgrade to Direct Drive?

Another reason you might want to upgrade your Ender 3 to direct drive is for the improved extrusion accuracy and reduced stringing. Because the extruder is very close to the hot end in a direct drive system, there’s less room for error, and the extrusion process is a lot more accurate. As such, you can expect higher-quality prints, with less over or under-extrusion, with a direct drive extruder.

Plus, if you have a direct drive extruder, you can use a lower retraction distance in your 3D slicer while still achieving less stringing on prints than with a Bowden-drive extruder.

While there are many ways one can turn an Ender 3 (Pro/V2) into a direct drive printer, I’ve found the easiest and the least expensive option is to use the existing motor and move it so that it’s directly over the hot end. In the sections below, I’ve gone over what exactly you’ll need to make this upgrade. 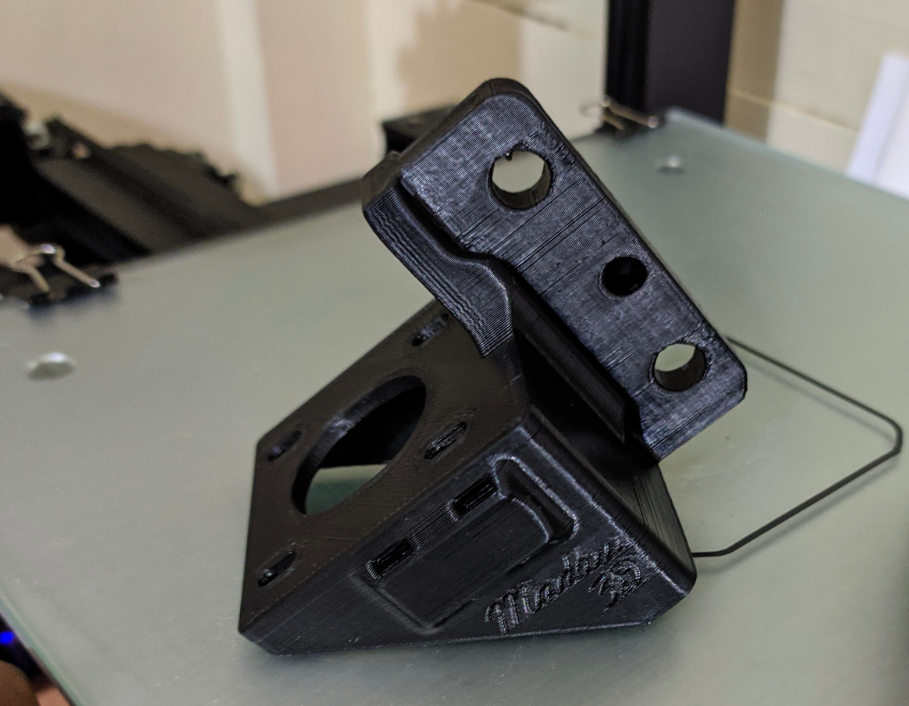 For this upgrade tutorial, the most important part you’ll need is a motor bracket. This bracket will attach to your Ender 3’s printhead and will be the new location for your printer’s extruder stepper motor.

The easiest way to get a bracket like this is by 3D printing it, as there aren’t many purchasable options for this type of part because it’s a niche area. Thanks to the large community behind the Ender 3 (Pro/V2), there are many different direct drive brackets online that fit the Ender 3 to choose from.

For the original Ender 3 and Ender 3 Pro, I recommend using the Ender 3 Direct Drivinator from Thingiverse. And, if you have an Ender 3 V2 because the printhead carriage is slightly different, you should use a bracket like this V2-specific option from Thingiverse.

As we’re moving the extruder stepper motor to a new position, further away from the motherboard, you’ll also need an extension cable for the motor. Any 6-to-6 pin (with 4 wires) should work, such as this Chinese option on Amazon (smallest length).

However, when you get the cable, double-check the internal wiring so you know all the wires are matched up to the right pins. While it’s rare, some users have received stepper motor cables with mismatched wires.

Also, if you know how to solder and have some spare wire, then you don’t even have to purchase an extension cable at all. You can just cut the existing wires and solder the extension pieces on to make the cable longer.

Next, you’ll need the tools that should have come with your Ender 3 (Pro/V2), as we’ll use these to disassemble the stock extruder and printhead assemblies as well as install the new hardware.

If you don’t have the original tools that came with your printer, just make sure you have a full set of Allen keys, the two-sided spanner wrench for the Ender 3, and a pair of pliers, just in case.

As I mentioned, this article is for making the Ender 3 direct drive using as much of the original hardware as we can. However, an alternative method for making this upgrade is to replace the printhead and extruder entirely with an all-in-one option like the E3D Hemera or the Creality Sprite.

These “all-in-one” options are printheads that have the hot end, nozzle, extruder motor, and extruder assembly all under one roof, in one assembly. They’re a lot more compact than using a motor bracket, and they also tend to achieve a better print quality than using the original hardware. However, as you might expect, they’re also a lot more expensive.

So, while the rest of this article is meant for those upgrading their Ender 3 (Pro/V2) to direct drive using a 3D printed motor bracket, note that this is another path you can take.

Before we start the Ender 3 direct drive upgrade process, you should remove the filament from your printer and shut off your machine completely.

With the appropriate Allen key, unscrew the four bolts holding the stepper motor (on the lower half) to the extruder assembly (on the upper half). Make sure you keep a hand under the motor because, once that last bolt is loose, the motor will fall down (and it’s pretty heavy).

Now that we’ve got the extruder disassembled, we need to disassemble the printhead so that we can fit the motor bracket in the right spot. To do this, start by removing the two screws (only one for the Ender 3 V2) that hold on the hot end shroud. Once you pop the shroud off, you can let it hang by the fan wires or try to leave it on the X-axis gantry.

Next, loosen the two bolts at the top of the printhead carriage using the appropriate size Allen key for the front side and the two-sided spanner wrench for the back. The bolt won’t loosen unless you apply force to both the front and back sides!

Once loose, carefully take out the nut, then the bearing wheel, and finally, the spacer from each bolt. Then, take out both of the bolts, and set all of these pieces to the side.

Now, it’s time to fit the motor bracket on the printhead assembly. Start by taking your 3D printed bracket and fitting it around the printhead carriage. Make sure it’s properly oriented, too; you can use the image below as a reference (minus the motor + extruder assembly):

Finally, tighten the nut so that the assembly is properly secure, but the bearings can still roll freely.

Next, we need to attach the motor to the bracket. I’ve provided another reference image below so you can have something to go off of besides just words, but I’ll still do my best to explain it.

I’ve found that the easiest way to attach the extruder motor and assembly to the bracket is by starting with the assembly. Moreover, carefully pick up the extruder assembly you placed to the side earlier and line it up with the four holes on the 3D printed bracket. Remember, you want the PTFE coupler to be pointing down toward the hot end.

On this note, make sure (unlike the image) that there isn’t any PTFE tubing attached to your extruder. We’ll do that part later.

Once all four bolts are through the extruder assembly and the 3D printed bracket, pick up your motor, and line it up its four screw holes with the four bolts. Make sure the motor is oriented so that the cable port is pointing upwards (away from the nozzle).

Then, gently push the motor towards the screws and, with the right Allen key, slowly screw in the bolts from the extruder assembly side so that they go into the screw holes on the motor. Eventually, everything will be tight and secure; try not to overtighten the bolts, though, as this could cause the 3D printed bracket to break.

Next, remove the hot end assembly from your printhead carriage by unscrewing the two bolts holding it on. Then take your old line of PTFE tubing and cut off a strand of about 80 mm. Then push the PTFE tube strand down the hot end’s PTFE coupler until it stops at the nozzle.

After that, take the hot end and push the remaining PTFE tube into the extruder’s PTFE coupler. 80 mm should be just enough, but you might have to go down to 75 or 70 mm, depending on what bracket you use.

Once you’ve got the right length, though, screw the hot end back on!

Finally, connect the stepper motor cable to the port on the motor.

And that’s it! You’ve successfully upgraded your Ender 3 (Pro/V2) to direct drive extrusion! Now you can peacefully print flexibles and benefit from accurate extrusion.

As for performance, both Bowden and direct drive 3D printers can yield excellent prints, but direct drive setups are much better for printing flexibles. Additionally, direct drive extruder configurations are a lot better than Bowden setups when it comes to reducing stringing on prints. That’s because there’s less room for error between the extruder motor and the nozzle in a direct drive setup.

However, for beginners, Bowden extruders are preferable. That’s because they’re less compact, so they’re easier to work with, which is helpful for those just getting started with 3D printers.

So, if you want to print flexibles, are struggling with stringing on prints, or simply want to test out another upgrade on your Creality Ender 3 (Pro/V2), I strongly recommend making the Ender 3 direct drive upgrade!

And the upgrade is super easy, involving just two parts. Plus, the total cost of turning your Ender 3 (Pro/V2) direct drive costs anywhere from $0 to $10, which is very affordable considering the benefits direct drive brings!